(This article originally appeared on Drew Coffman’s website and is re-published here with his permission.)

There’s a new tool that I’ve been using for the last month that I feel has single-handedly transformed my time in quarantine from what would have been a scattered mess into a period of intense productivity.

Roam is a new research-oriented note-taking tool that I’ve been telling every single person I know about. Note-taking apps in the year 2020 are well-trodden territory, so I know that it might not sound like the most exciting thing — but Roam is the first note-taking tool I’ve ever found that works exactly how my brain does. I think you might find that you feel the same way.

Here’s the basic gist of it: Roam removes the mental weight of note-taking by providing you with something similar to mind-mapping. As you write whatever comes to mind, you can use a set of double brackets (like [[this]]) and Roam will generate a new note for whatever the subject might be. Here’s a screenshot of a handful of notes I’ve taken recently, and the connections that Roam creates. I’ve also left the first sentence in the leftmost note left un-marked-down so you can see what it looks like before Roam automatically converts it into a link. 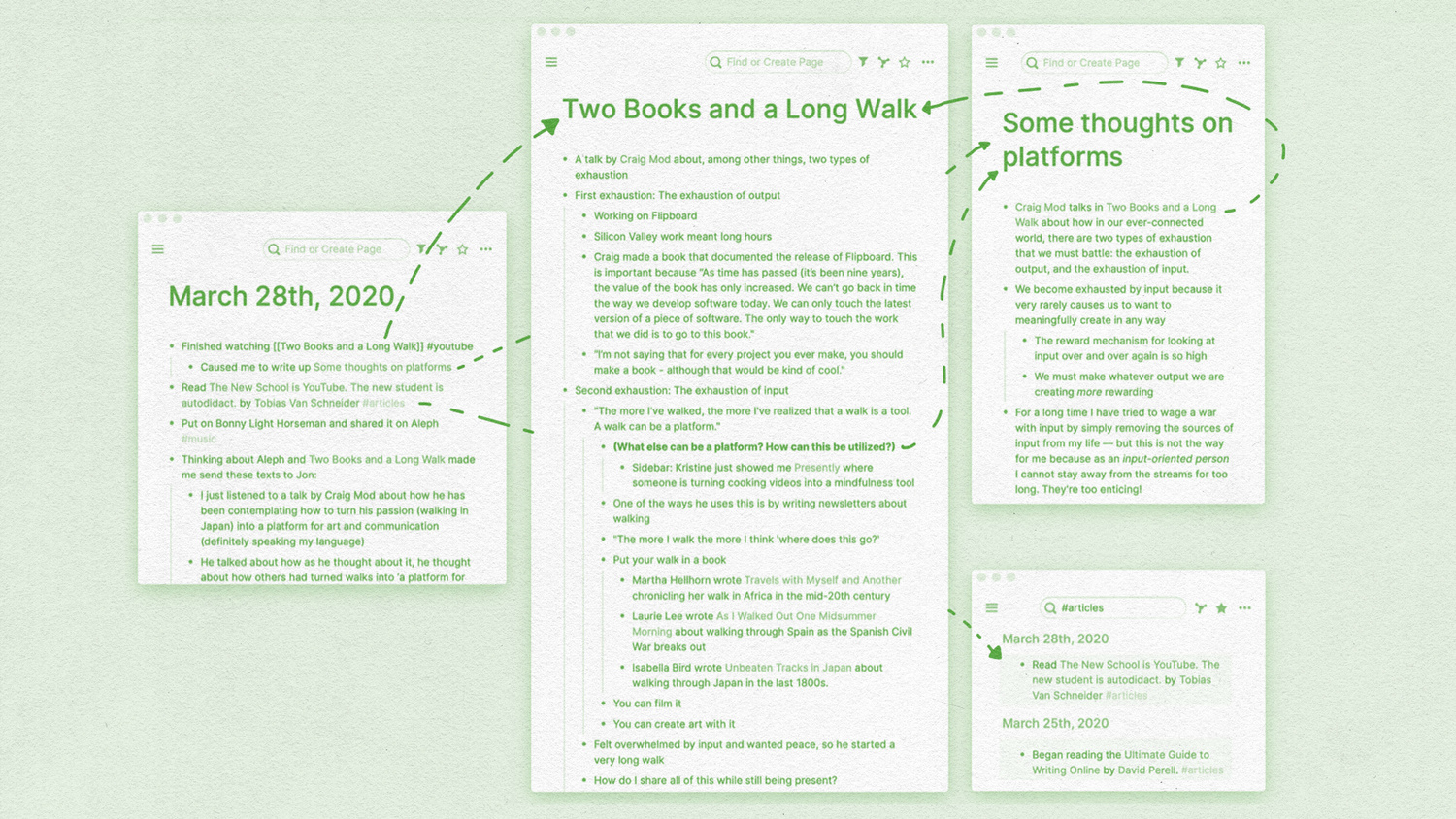 I spent some time watching Craig Mod’s [[Two Books and a Long Walk]]. It made me think of [[Steven Pressfield]]’s article on never stopping between projects.

In this case as I wrote, I decided to make ‘Two Books and a Long Walk’ its own page where I could take notes for it, and because I am a Steven Pressfield junky, I gave him his own page as well. If I find more of Craig Mod’s stuff that I like, maybe his name will become a page too. I chose not to create a page for Steven Pressfield’s article because there weren’t any notes that I wanted to take on it — but now this connection between Mod’s talk and Pressfield’s article will live on both pages, separately. After taking notes on the talk, I had my own thoughts about a tangential subject, so I created a new note called ‘Some thoughts on platforms’.

These bracketed links act in a similar way to what you are accustomed to seeing on a wiki site like Wikipedia. As opposed to a typical link which sends you to a page and requires you to do the work of getting back to where you came from, Roam’s links are ‘bi-directional’, meaning that each page automatically links to the other. 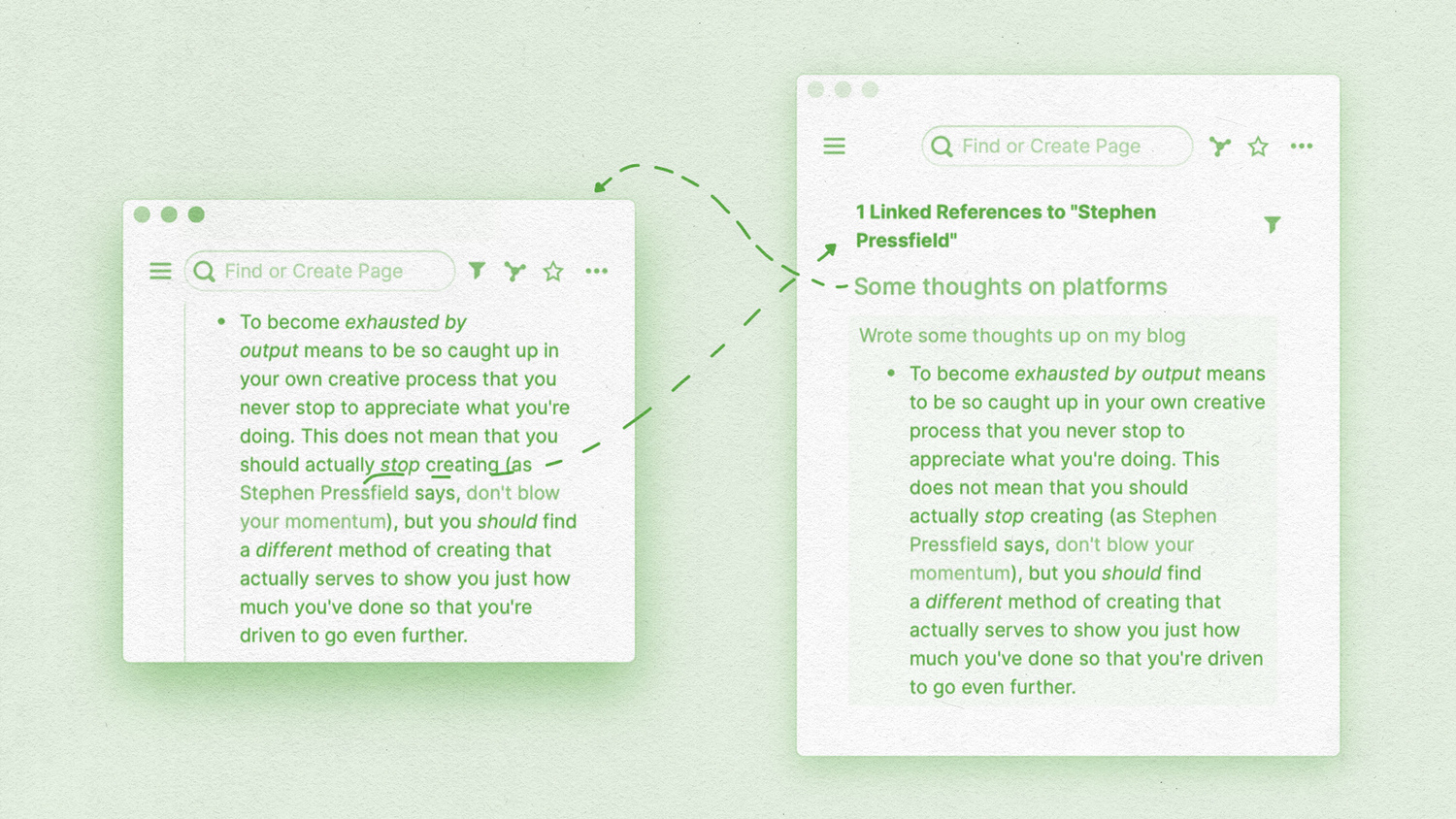 There is something incredibly liberating about this method of note-taking. It encourages me to see my notebook as a living document that is building upon itself constantly instead of seeing each note as something that needs to be built, completed, and acted on immediately.

I have been struggling with my own writing process for the past few years. There was a time (years ago) when I committed myself to writing at least 500 words every day, but this skill has languished over time to the point where I find it difficult to write even 200 words on a subject. When I do write those words I often leave them incomplete, the words sitting in a note-taking app somewhere, completely forgotten by me. In Roam, the fact that everything is connected means that nothing important slips through the cracks.

In the last week of using Roam I have written over 12,000 words in Roam. Yes, a part of that gain in writing is definitely due to the quarantine, but a big part of it is absolutely the freedom that Roam gives me to just write, and write at length on anything that comes to mind.

Roam also provides a visual graph of every page within your notebook and how they are all interconnected with one another. This is more powerful than you may realize. I can’t count how many times I’ve found myself clicking on this page and recognizing how a note is connected to other ideas which I would never have thought were similar. Having this high-level view of my own notes in a way feels like looking into my own subconscious as I make connections I would have otherwise never made. Here’s my initial graph, after some use.

So Roam has quickly replaced any note-taking apps I’ve been using and given me an increased drive to write — but there’s something else that Roam seamlessly replaced: My task manager. One of my greatest issues with task management apps has been the same problem I’ve had with note-taking apps in the past — that I don’t want to have to deal with the mental weight of figuring out where my tasks are supposed to live.

I will open a task manager to write something down, get distracted by the urgent tasks that are left unchecked, and immediately get frazzled — or I will meticulously build sections into my task manager, add tasks to each, and then forget about them as they become buried too deep in the app’s hierarchy of folders and buckets to be easily acted on.

Roam has a feature called ‘Daily Notes’ which are automatically generated notes with a date stamp. I am using these notes to keep an activity log of sorts. The note above about Craig Mod’s talk lives in that day’s Daily Note – as I pulled it up and started watching, I wrote that down in Roam. At any point you can hit ‘command-enter’ (control-enter on Windows) on any text to turn that block into a task with a nice little empty checkbox. Here’s an example of how I might use that:

I just found out about 750 Words and it feels incredibly relevant to an idea I’ve had. I need to think about this!

I then simply hit ‘command-enter’ on that text and it becomes a task — and that task gets added to another page called ‘TODO’ where every task I’ve ever created is listed, helpfully telling me what page each task lives on to give me context.

Just like the quality of my notes has increased dramatically, I am now creating better tasks than I have in years.

It is clear that there are many, many different ways to use Roam. This is just the way that I’m using it.

Here’s a little analogy: I have always been fascinated with the desks of artists. They’re often layered with minutiae, covered in research notes, references, and anything else that they may find interesting — like Austin Kleon’s. Roam has become my digital version of that cluttered desk. From the outside looking in it may be a little chaotic and inaccessible — but every note is so necessary, stacked in the pile just so. 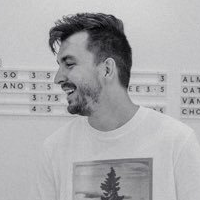 Drew is a creative consultant who spends his time online tweeting, writing on his personal site, and talking about our relationship with technology on his podcast Internet Friends. 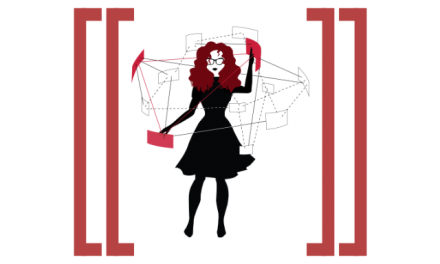 The Memex of a Matriarch

Finding patterns in the past: Using Roam as a self-therapy tool 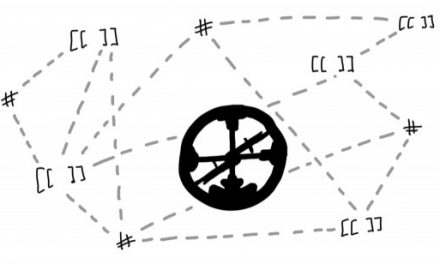 Getting comfortable with Roam 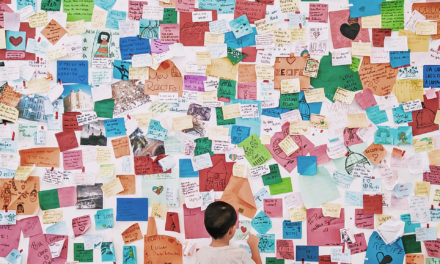 How My Road Led to Roam