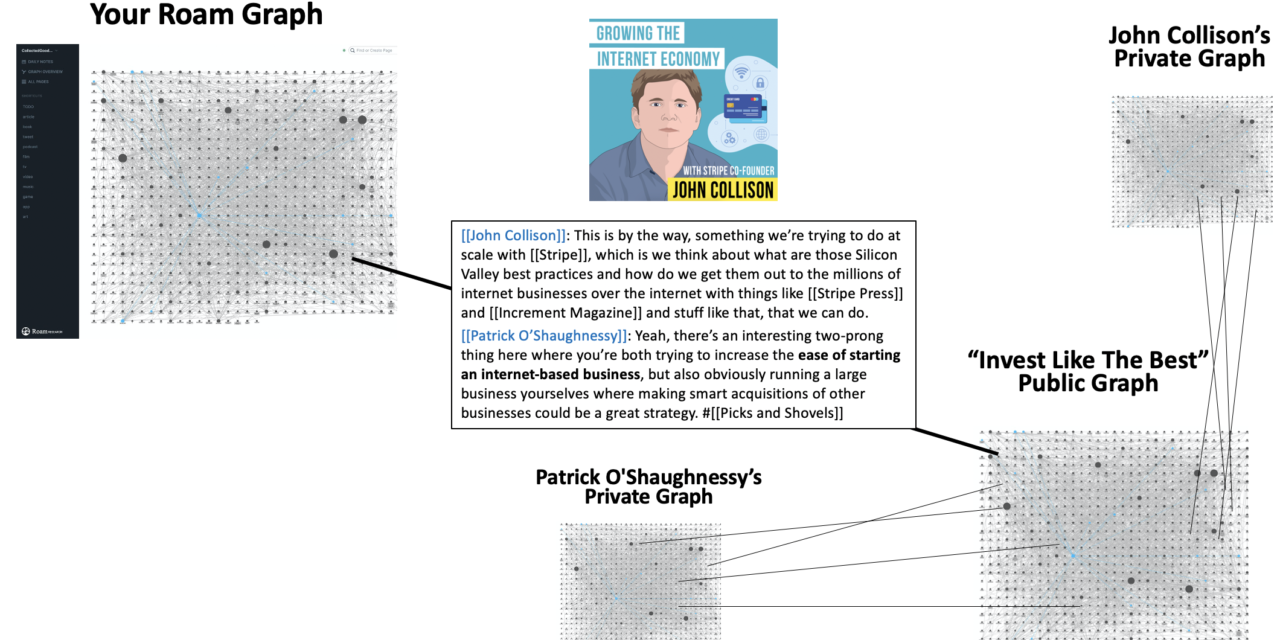 “Not just a note-taking app”

There are a lot of reasons why Roam Research is a good note taking app. Several very smart people have explained how to set up your note-taking productivity brain in Roam across a library of videos, articles, courses, tweets, and crop circles. You’ll see people using Roam for everything from tracking lists of to-dos and groceries to keeping notes on everything they’ve ever read. There is always plenty to learn about using Roam as a personal productivity tool.

But, there is a reason some people don’t like to call Roam a note-taking app and it’s because they’re dreaming the dream. You may think the simplest vision is a more effective collaborative note-taking app that can more easily sell into enterprise customers. And that’s a good business model to put down on paper.

But nobody dreams in business models. The #roamcult community often hints at some grand vision of Roam’s colossal potential. This is an attempt to try and put that vision into words. Quick disclaimer: this is one user’s daydream about the product and doesn’t constitute a true company roadmap any more than your drawings of the Mars colony act as a guiding principle for SpaceX. (Unless you work at SpaceX; in which case, carry on.)

What is the right analogy for Roam?

The rise of “Uber for X” has been pretty common in tech for a long time. VCs and founders often enjoy poking fun at how crazy these analogies can get (e.g. the Palantir for fruity beverages, the Etsy for waffles), but here are a few that have been applied to Roam. I can’t help but say “yes, and more” to all of them.

Today Roam is a powerful single-player tool that you can think of as a functional reactive coding environment for remixing your own thoughts. Use cases extend from grocery lists all the way to conceptual SQL scripts for your ideas.

Co-founder Conor White-Sullivan has compared Roam to Excel as both are products with “a low floor and a high ceiling.” You don’t have to start using Excel by using pivot tables. It’s the same product no matter how advanced you are as a user. But, like with Excel, you get more power out of Roam as you get better at using it.

In Excel the “atomic” level of any worksheet is the cell. Each cell has a reference: for example, the first column over and the first row down is cell “A1.” You can have any type of data in each cell (numbers, text, dates) and you can then reference that cell elsewhere in the workbook to remix what you’ve created.

In Roam we’re working with graphs instead of worksheets. Graphs are the collection of pages and bullets across a specific account. Roam takes the concept of referenceable pieces of data and applies it to each bullet point, or block. Roam is letting you take each and every thought you have and assign it a unique identifier (e.g. a block reference). This turns unstructured data (random ideas in a text string) into structured data. Your thoughts become code.

You can think of any Roam graph or page as a private or public repo for thoughts. Right now with Roam’s current functionality, your repos are mostly private.

But Roam was never built with the vision of being a really great single player product. Instead, it was built with a much grander vision of allowing users not just to read each other’s public notes but also to remix them.

Imagine a podcast. You have, for example, two guests. One show. And you. That interaction could involve four graphs. John Collison and Patrick O’Shaughnessy sit down to create a podcast episode. They build the public graph for the episode by contributing from their private graphs. Then you’re able to reference that collaboration into your own graph without losing any context for where those ideas came from. 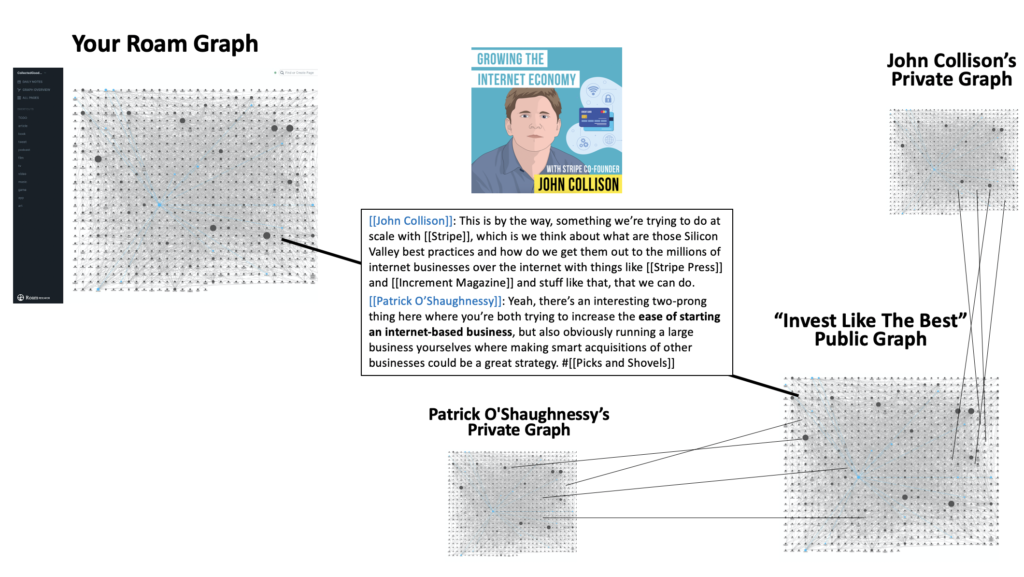 What you start to see is collaborative knowledge work that isn’t passive. You want to write code that you can put into production. You want to have ideas that drive towards action. Block referencing something from someone else’s graph is a pull request into each other’s minds.

Cunningham’s Law: “The best way to get the right answer on the Internet is not to ask a question; it’s to post the wrong answer.”

When an idea sits on a static website, it is irrefutably there without any context for whether it is right or wrong. When an idea sits in a Roam graph with block references to every time it has been supported or refuted, that is when you can start finding the right answer.

Once you see the power that will come from collaborative Roam graphs, you might be starting to catch the grander vision.

What really broke down in Google’s original vision is the incentive system they were building towards. There is a very specific subset of information you’re interested in “organizing” when you’re trying to serve the perfect ad. 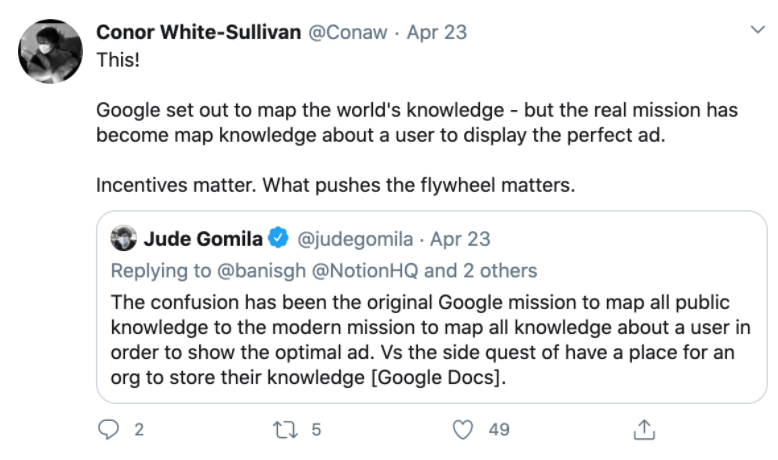 One functional problem with organizing the world’s information is the ingestion point. Google search can only access what people have put on a website and made public. They get closer when they ingest email and Google Docs. But a key difference is the user’s process of creation: we create raw text in all these Google apps but they don’t have very much context.

Roam has created an interface that users resonate with. It becomes their default “thinking” interface. That leads to more meaningful usage that is creating [[relationships]] right in the process of thinking.

If Roam continues to succeed at empowering the individual user, becoming the platform for shared public thoughts, and organizing all of that information into a shared index of knowledge, then you start to see Roam transition from a tool to a utility, sort of like the internet.

Roam is the World Wide Web 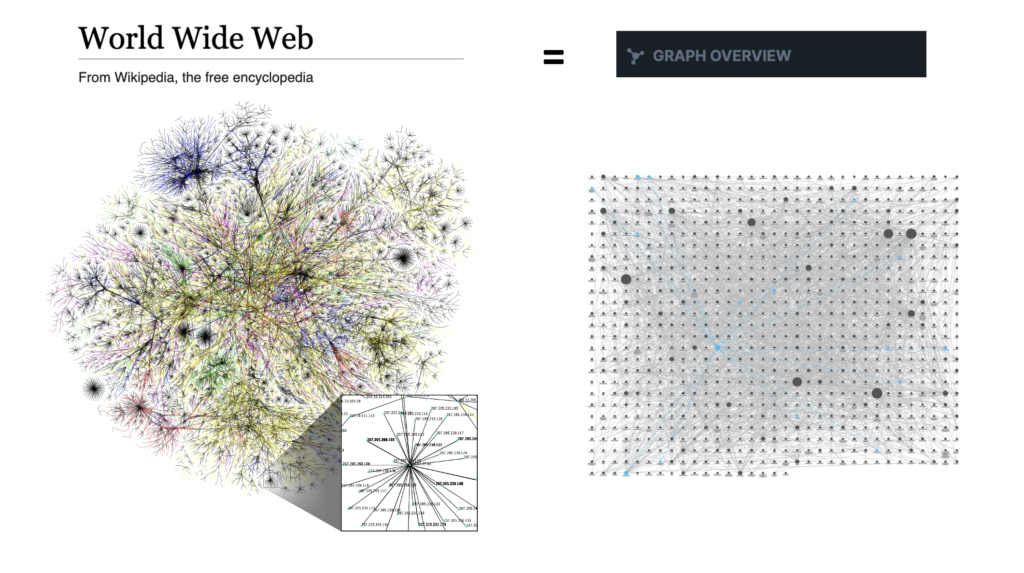 The web is created when you link from one link to another. You can get from one site to another. What you can’t see is all the places that link is being referenced.

But you can with Roam. Imagine the internet, but with backlinks. The architecture is already the same. Every domain is a block, every child block is a subdomain. They just need to let you see the links back and forth. 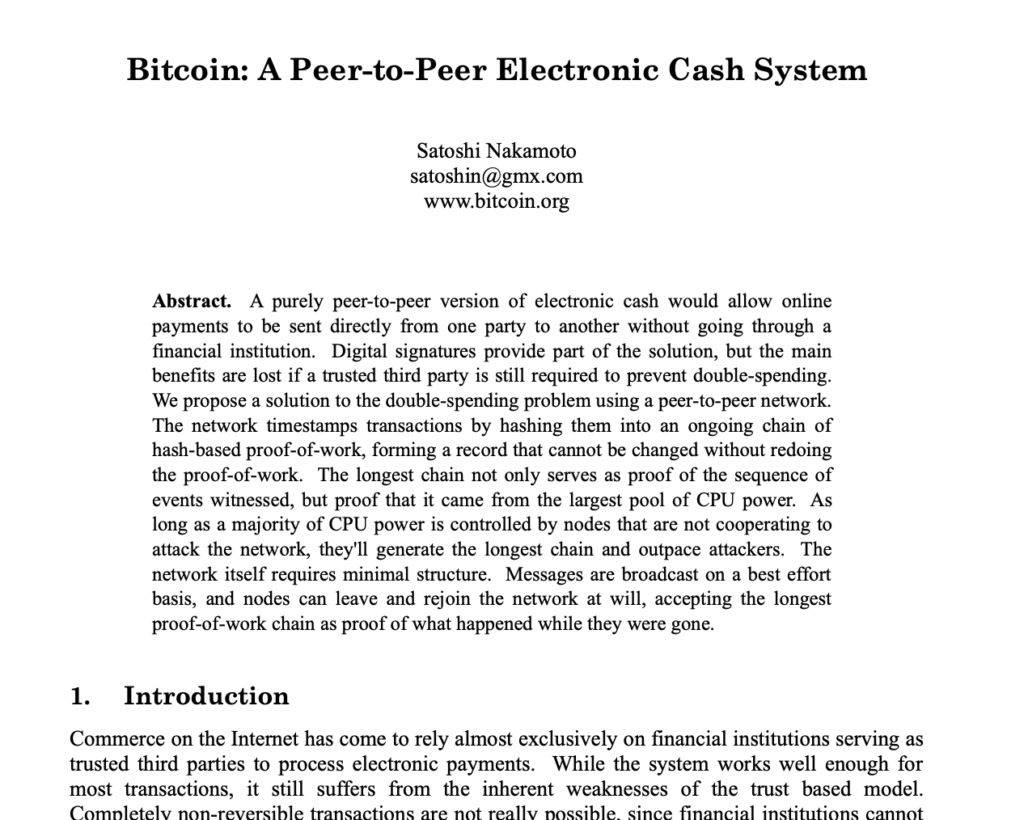 Certainly with things like Google Scholar you can get to an interconnected bibliography. But what if the white paper lived in a public Roam graph and you could see where every block was referenced in context? 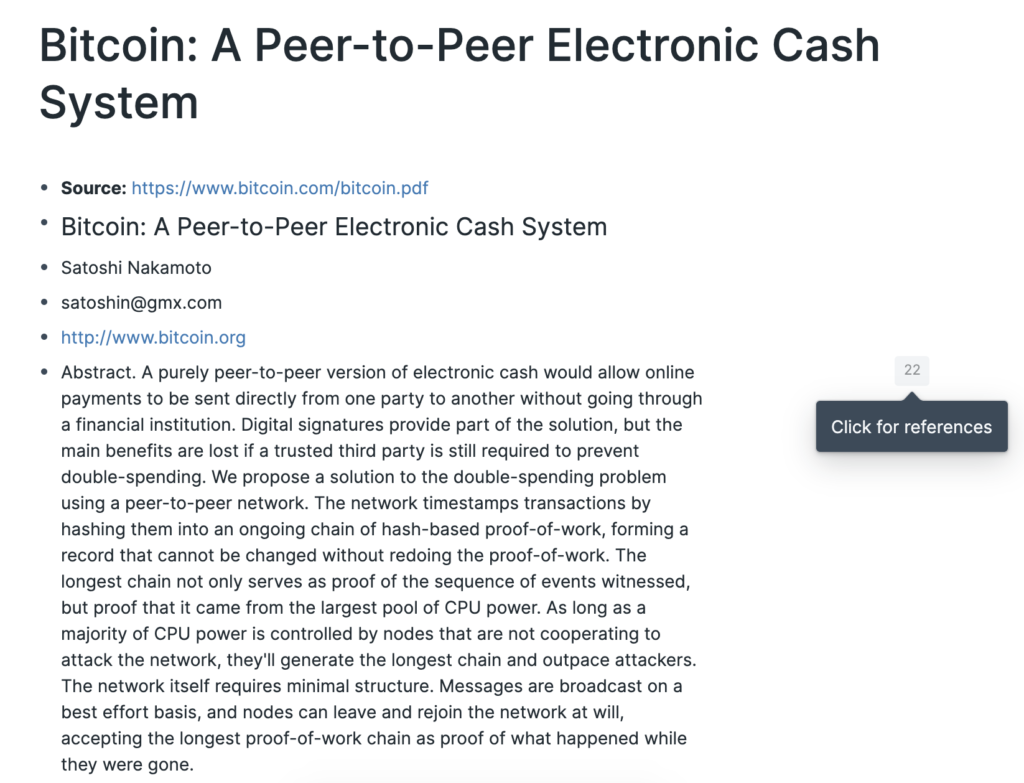 Now imagine a living breathing Roam graph for the most important collections in the world. Every scrap of research on A.I., cancer drugs, criminal case law, human rights violations, it’s all in a graph that you can reference and see — not just the text but every related backlink and linked reference across other people’s context. 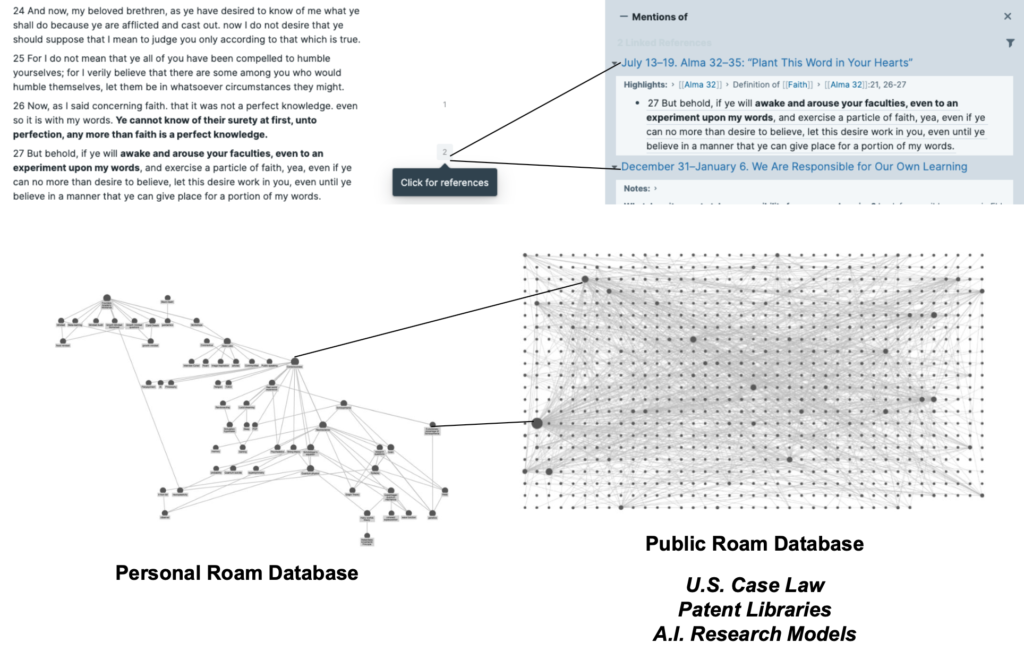 Imagine you’re a cancer researcher in Chicago. You’re poring over a query showing every time [[carboplatin]] has come up in relation to [[oxaliplatin]] without references to [[melatonin]]. You see one small unlinked reference in the notes of a marine biologist in Oslo who has been studying cancer cells in whales. She uses a term you’ve never heard of before. She also references the work of a nuclear physicist in Moscow who has spent 30 years writing about cellular decay and he is the world’s leading expert on a chemical you were totally unaware of. You don’t know it yet but you just cured cancer.

Tim Berners-Lee, the father of the World Wide Web had this vision:

“All the time we are very conscious of the huge challenges that human society has right now — curing cancer, understanding the brain for Alzheimer’s, understanding the economy to make it a little bit more stable, understanding how the world works. The people who are going to solve those — the scientists — they have half-formed ideas in their head, they try to communicate those over the web. But a lot of the state of knowledge of the human race at the moment is on databases, often sitting in their computers, and actually, currently not shared.“

The Global Knowledge Graph would be a collection of ideas at the sub-atomic level with a reference engine connected to each unit. When Harry Stebbings asked Conor White-Sullivan for his most ambitious vision, it was the global knowledge graph:

So can you use Roam to keep track of your grocery list? Definitely. You can even query the number of times you’ve gotten bananas in the last month. But you’ll have to excuse those of us in the #roamcult that can’t stop talking about Roam eventually building The Oasis or becoming the OS for Neuralink. We’re dreaming the dream of the Global Knowledge Graph. 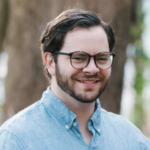 Kyle is a venture capital investor at Index Ventures focused on software investing. He spends his time thinking about the future of technology and investing as part of Investing 101 2.0, reading the best he can find from others in an ongoing project called Live the Library, and as a member of the Church of Jesus Christ of Latter-Day Saints. He had the privilege to contribute a public Roam graph for the Book of Mormon and other religious texts to the RoamPublic directory. He lives in Millbrae, CA with his wife and two sons. You can connect with Kyle on Twitter at @kwharrison13 or on his website at kwharrison13.com. 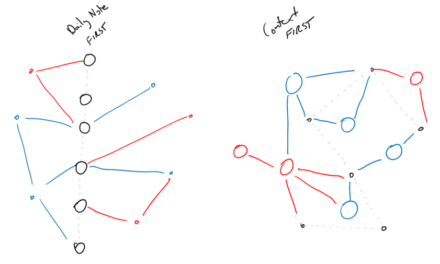